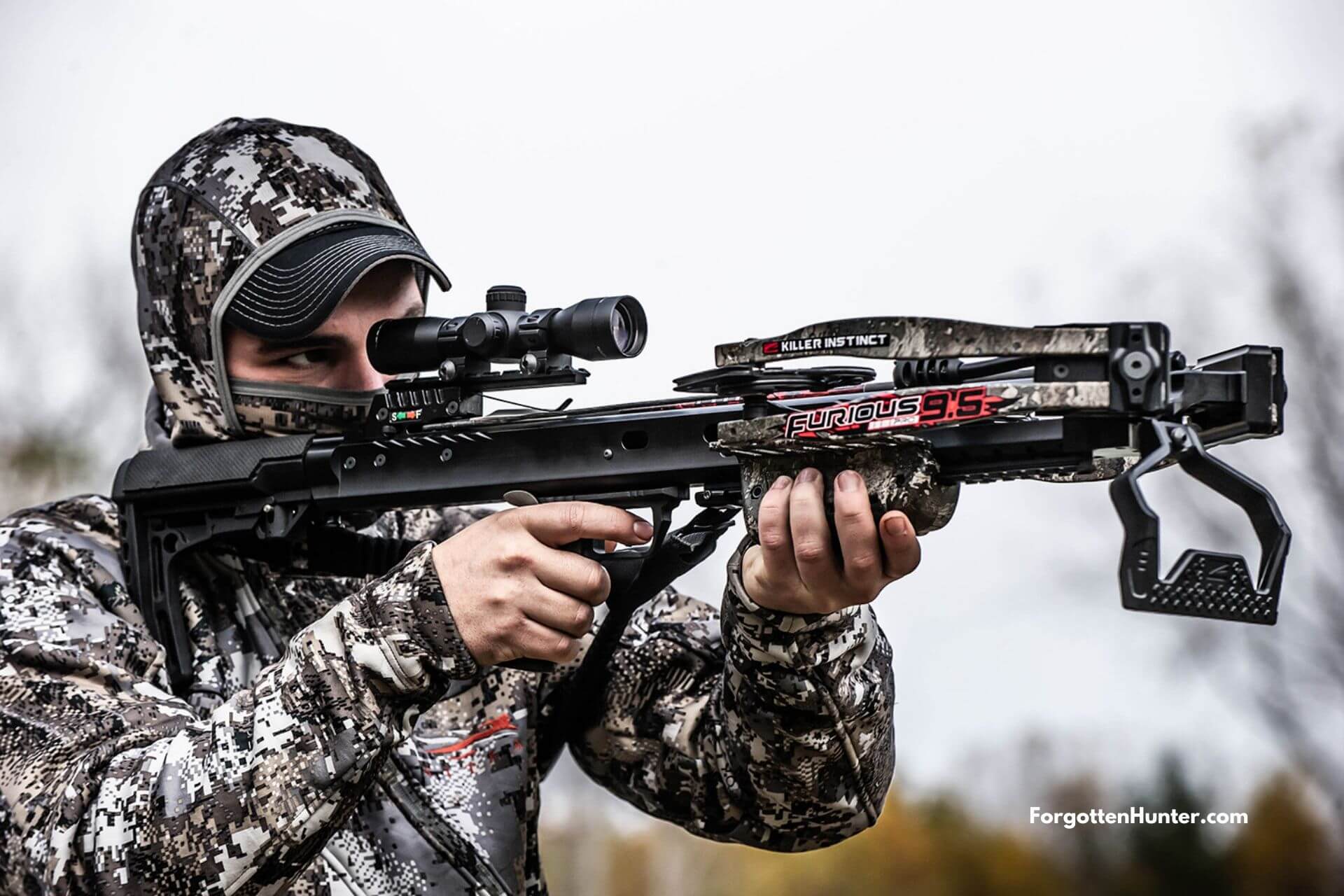 Killer Instinct Crossbows is a relatively new company in the crossbow market, but their parent company Hawk is a highly respected name in the hunting market. Hawk is best known for their treestands, climbing steps and sticks, and many other hunting accessories.

Killer Instinct claims that the Furious Pro 9.5 is “Ready to dominate the woods, the FURIOUS™ PRO 9.5 is a monster that’s fierce with power, control, and accuracy. Unparalleled crossbow maneuverability, feel and responsiveness is delivered from the ultra-narrow frame that cocks down to a low-profile, 9.5-inches wide.” It also has a 3pound trigger, Hogue Grip, and an adjustable length AR-style buttstock.

When first picking up the Killer Instinct Furious Pro 9.5, you instantly feel that it’s a really lightweight crossbow. The crossbow only weighs 7 pounds and measures Axle-to-Axle 14.125 inches when uncocked and 9.5 inches when cocked.

Hunting out in the field is when you really appreciate narrow crossbows and the Furious Pro 9.5 is a really narrow and maneuverable crossbow!

The Furious Pro 9.5 itself is actually already a very accurate bow with the factory included bolts (3-Inch groups). To actually shoot with even more accuracy, we recommend using a heavier bolt for the Killer Instinct Furious Pro 9.5.

We’ve tested the bolts from Borkholder Archery, they’re more accurate than the factory included bolts (2-Inch groups) and they come in at around 380-385 feet per second. We should also note that the heavier bolts will also give less damage to the crossbow over time and therefor will last longer.

The Killer Instinct Furious Pro 9.5 comes with a LUMIX 4 x 32 IR-E Scope. The scope should come already calibrated for 20-60 yards with 10-yard increments. Fine tuning may be required depending on setup & bolt weight.

The Lumix 4×32 IR-E premium glass etched scope features multi-reticle aim points that have rheostat brightness illumination in red or blue for low light settings. It also has a total of 5 brightness settings!

As we already explained in the Speed and Arrows section, the Furious Pro 9.5 is a very accurate bow. Out of the box it can shoot groups of 3-inches!

“Starting at ten yards, shoot your crossbow into a target and adjust the scope until your bolt is hitting where you aim. Move back to the preferred yardage for your top reticle mark and shoot again. Re zero the bow to hit where you are aiming. EX.- If shooting at twenty yards and your crossbow is shooting two inches high and one inch to the left, adjust windage by turning counter clockwise approximately 16 clicks. Adjust the elevation turret by turning clockwise approximately 32 clicks to zero in the scope. A good rule of thumb is at 16 clicks, your aiming point will move one inch at twenty yards.”

Always read the instruction manual that comes with your crossbow!

Your Killer Instinct Furious Pro 9.5 is now fully assembled and ready to cock and shoot!

“The DSC™ rapidly attaches and detaches in seconds to safely and silently cock your crossbow at a moment’s notice.  This compact, sleek design with speed connect socket is constructed of high-strength aluminum alloys to reduce weight and ensure years of trouble-free use.”

The Killer Instinct Furious Pro 9.5 has a really good feel. Thanks to the Hogue grip, adjustable UltraStealth Cheek Weld and a very clean three-pound trigger, the Furious Pro 9.5 competes with the top-of-the-range models like Ravin and TenPoint but at a much lower cost.

Killer Instinct also installed an Anti-Dry fire mechanism on the Furious Pro 9.5 that is engaged until you load a bolt into the trigger box. The string will be caught by two prongs if it was ever fired without a bolt.

The Hogue Grip installed on the crossbow feels very nice. Your hands lock into grip, it has a comfortable non-slip cheek rest, giving you better control and feel.

Thanks to the very crisp three-pound integrated Pro-Series trigger, the Furious Pro 9.5 accuracy is on the money. Finding a crossbow under $1000 that can shoot 3-inch groups is very hard.

Immediately replace worn, cut, or frayed string, serving and cables prior to shooting. String and cables should be replaced every three years under normal shooting conditions or sooner if signs of wear exist.

The Furious Pro 9.5 will suit any hunter. Killer Instinct once more delivered a very accurate, fast, and compact crossbow for not a lot of money. Hunt in treestands, blinds, or just out in the field and you’ll feel very comfortable with this crossbow. The Killer Instinct Furious Pro 9.5 package is all you need for a successful hunting season!