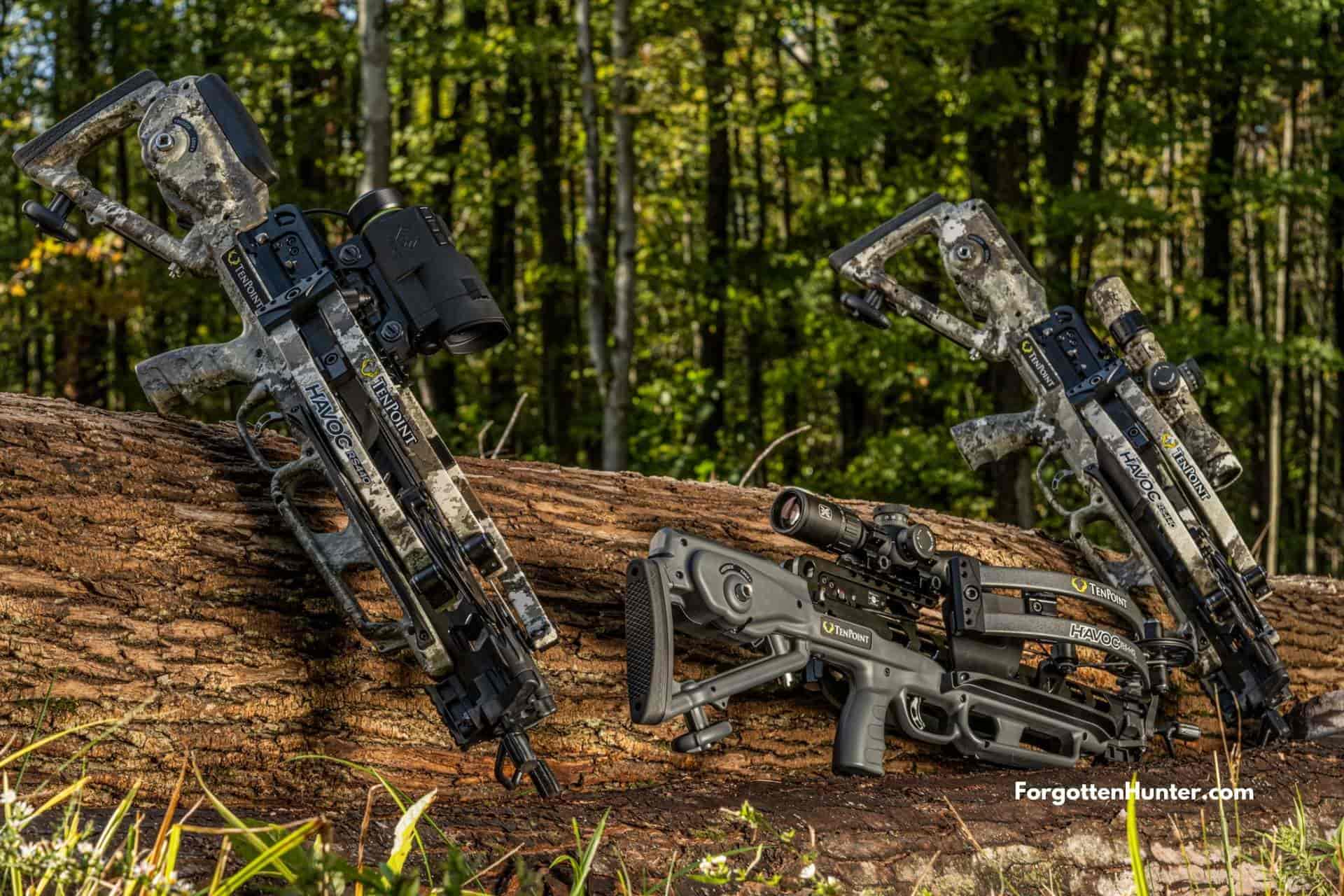 Wicked Ridge has released 2 very promising crossbows for the 2021 hunting season and because Wicked Ridge is TenPoint’s budget brand, we’ll discuss both of their 2021 crossbow lineups in this post.

TenPoint announced their new crossbows for the 2021 hunting season. TenPoint partnered up with Garmin to release the first crossbow with a built-in rangefinder scope; the TenPoint Vapor RS470 XERO. A major upgrade to last year’s Vapor RR470. They also announced two other crossbows, the Havoc RS440, which they advertise as “The fastest compact hunting crossbow ever” and also the Siege RS410, “The quietest compact hunting crossbow ever produced!”

TenPoint’s flagship model for 2021 is the Vapor RS470 XERO. It’s the first crossbow with a built-in rangefinder scope. Besides a few details, it’s basically a big scope upgrade for the Vapor RS470 from TenPoint’s 2020 lineup.

The Vapor RS470 XERO’s length is 31 inches, width uncocked 12 inches and cocked 6.5 inches. It’s weight is quite a bit heavier than the “normal” Vapor RS470. With the Garmin XERO, this crossbow weighs around 10 pounds. It’s still speed-rated with 3 different types of arrows. To actually reach the 470 feet per second you’ll need to buy the TenPoint Pro Lite carbon arrows with a weight of 370-grains.

The Garmin XERO X1i rangefinder scope is the Vapor RS470 XERO’s main feature. It’s an amazing piece of technology that can automatically range game up to a 250-yard distance. We’ve already reviewed the XERO scope and it’s insanely accurate. If you’ve got steady hands or a bipod/tripod to steady your crossbow, you’ll ‘robin hood’ your arrows at 100-yard distances.

Because of the Garmin XERO’s height, TenPoint added an elevated custom cheek-piece to provide the perfect eye level alignment. TenPoint also includes their S1 Trigger which offers a 3.5-pound, crisp and zero-creep pull.

Click here to read our full review of the Vapor RS470 XERO.

Second in TenPoint’s 2021 crossbow lineup is the TenPoint Havoc RS440. TenPoint released this crossbow with the EVO-X Marksman Elite scope and the Garmin XERO X1i Rangefinder scope. It’s advertised as “the fastest compact crossbow ever.”

To generate the force required to reach the 440 feet per second, TenPoint used the reverse-draw design, a 270-pound draw weight and a brand new 16-inch arrow. The TenPoint Havoc RS440 is speed-rated with TenPoint’s new 16-inch EVO-X CenterPunch premium carbon arrows. These arrows have a weight of 400 grains and are also available with the lighted nocks.

TenPoint also features the ACUslide cocking and decocking system on the Havoc RS440. Just like with the Vapor RS470 XERO, the ACUslide reduces the cocking effort to just 5 pounds. The S1 trigger offers a smooth, zero-creep 3.5 pound pull.

Click here to read our review of the Havoc RS440.

Last but definitely not least, the TenPoint Siege RS410. TenPoint claims it’s the “quietest compact crossbow ever.” TenPoint equipped the Siege RS410 with the RangeMaster Pro scope and the ACUslide safe and silent cocking and decocking system.

Using the same compact reverse-draw design as the Havoc RS440, the Siege RS410 also measures just 26.5 inches in length, 12.3 inches wide when uncocked and 7.5 inches wide when cocked. Without the accessories, this crossbow has a weight of 7.5 pounds.

Using the new TenPoint 16-inch CenterPunch premium carbon arrows and a draw weight of 220 pounds, this crossbow manages to reach speeds of 410 feet per second!

To keep it as quiet as possible, TenPoint includes an integrated string stop system which catches and dampens the sound of the string at the end of the barrel. By limiting the draw-weight of the Siege RS410 to 220 pounds, the limbs aren’t under maximum pressure and they generate a lot less sound than the Havoc RS440.

Click here to read our review of the Siege RS410.

The Wicked Ridge NXT 400 measures a full length of 33-inches(without stirrup) and an axle-to-axle width of 19-inches uncocked. The crossbow weighs only 7.4 pounds. This technologically advanced Wicked Ridge crossbow is built with TenPoint’s Narrow Crossbow Technology (NXT) bow assembly. The NXT bow assembly is responsible for its narrow 6 inches cocked width and delivers speeds of 400 feet-per-second with same-hole down-range accuracy speed rated with a 400-grain arrow.

The crossbow comes with TenPoint’s, crisp and consistent T5 trigger, all the safety features you’d want from a 2021 TenPoint crossbow, TenPoint’s 3x Pro-View Scope, and has TenPoint’s ACUdraw crank cocking device fully integrated into the crossbow’s stock. Accudraw allows for effortless, safe, and silent cocking that can be done by anyone and all ages.

Click here to read our review of the NXT 400.

With the Wicked Ridge Blackhawk 360, TenPoint aims to dominate the entry-level hunting crossbow category. This budget-friendly hunting crossbow is not made in China like most budget crossbows but right here in the USA. It is the lowest-priced American-made crossbow ever that shoots arrows down-range with speeds up to 360 feet-per-second.

The bow assembly consists of an aluminum riser and two 11” WRX laminated limbs that are powered by heavy-duty machined 5S cams and high quality, durable DynaFLIGHT 97 string, and cables.

Cable runs under the flight rail are guided by a cable saver slide that ensures zero down pressure on the string to rail. Also, the cross over of the cables is staggered to limit cross over rubbing, cable to cable. This design extends the string life exponentially.

The crossbow has a tactical black stock with a fully integrated fore-grip. The stock features a Picatinny rail below the front of the barrel to mount additional accessories.

Click here to read our review of the Blackhawk 360.

Some of the links on this website are affiliate links. We may earn a small commission if you click through and make a purchase, with no additional cost to you.
Please note: We have not been given any free products/services from companies in exchange for reviewing their products/services.