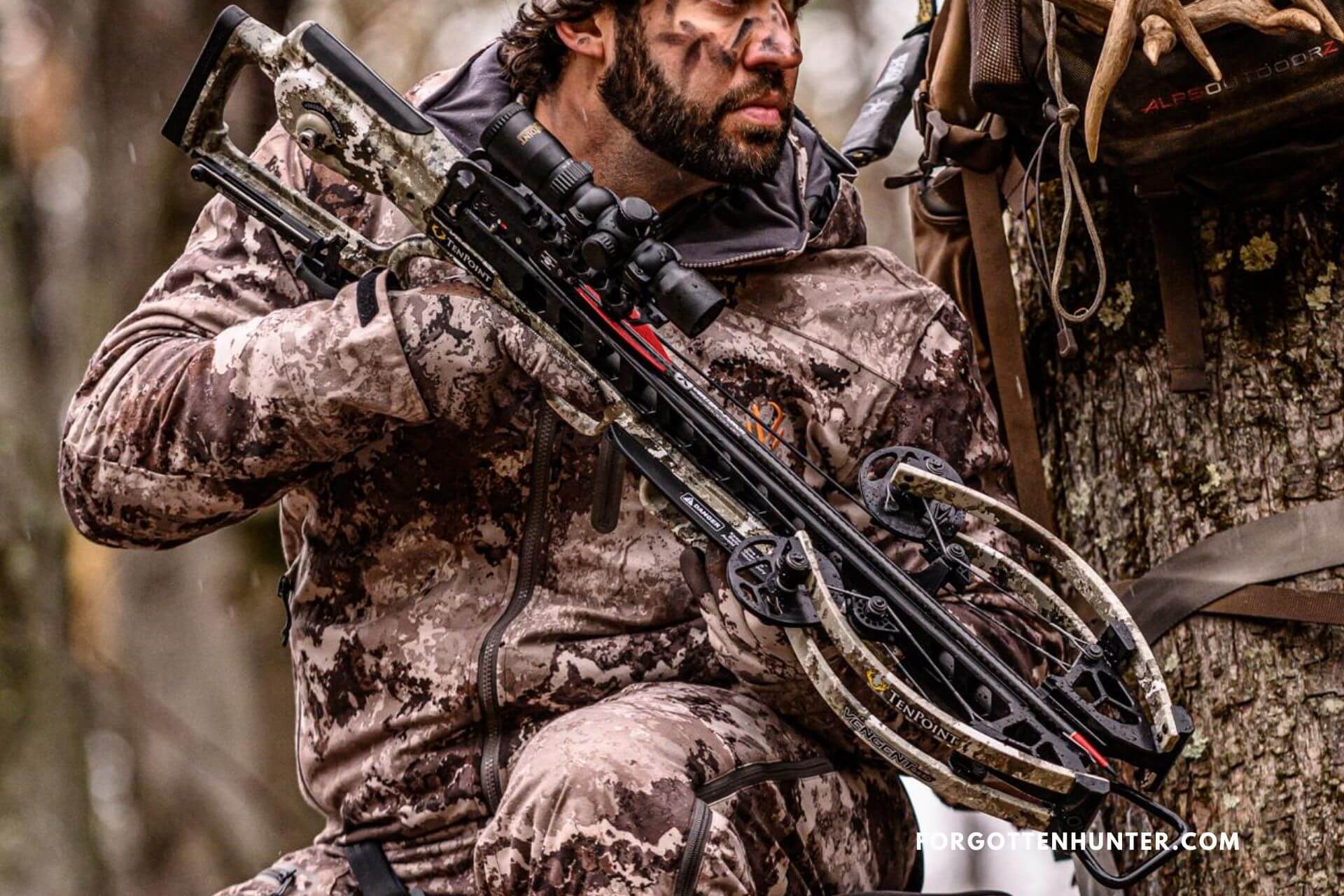 TenPoint released the Vengent S440 along with a couple of other high-quality crossbows for the 2020 hunting season. TenPoint advertises the Vengent S440 as “the fastest and narrowest forward-draw crossbow ever.”

For the people that do not know: TenPoint is an American owned and operated crossbow company that manufactures their crossbows in Mogadore, Ohio. TenPoint also owns Wicked Ridge crossbows. Wicked Ridge sells high-quality crossbows at a cheaper price than TenPoint.

Is the Vengent S440 a good pick for you? Read our full review below!

TenPoint always builds high-quality crossbows. The Vengent S440, like most of TenPoint’s crossbows, is quite an expensive bow. The features that TenPoint added to the Vengent S440 justifies the price though.

TenPoint claims the Vengent S440 is “the fastest and narrowest forward-draw crossbow ever.” Measuring just 11 inches in width uncocked and 5.8 inches cocked, it really is a very narrow crossbow.

The Vengent S440 is quite a long but lightweight crossbow. It measures a total length of 35 inches and weighs just under 8 pounds at 7.7 pounds total.

TenPoint did an amazing job at balancing the Vengent S440. It doesn’t feel nose-heavy at all and feels perfectly balanced.

As you can probably already tell by the name; the Vengent S440 can shoot arrows at 440 feet per second. This can be a bit misleading though, you can only hit the 440 feet per second if you use a Pro Lite Carbon Arrow of 370 grains.

You’ll have to buy the Pro Lite Carbon Arrows separately on Amazon, because TenPoint doesn’t offer these arrows with any Vengent S440 package. TenPoint do deliver a 6-pack EVO-X CenterPunch carbon arrows that weigh 445-grains and reach speeds of 410 feet per second. Below is a table that highlights the differences between the arrows that TenPoint recommends for the Vengent S440.

It’s best to shoot the EVO-X CenterPunch Carbon arrows for longevity of the crossbow. Most “newbie” hunters shoot the crossbow with the lightest possible arrows, which gives more vibrations and shock through the whole crossbow and therefor ruins/breaks your crossbow faster.

TenPoint creates these scopes themselves as well. The RangeMaster pro scope was officially designed for crossbows that shoot between 275 and 425 feet per second. The Vengent S440 can shoot arrows at 440 feet per second, but the right choice of arrows would be the EVO-X CenterPunch carbon arrows.

With the EVO-X CenterPunch carbon arrows you’ll hit 410 feet per second. They weigh 75 grains more than the Pro Lite carbon arrows. This reduces the speed but gives deeper penetration. The Kinetic Energy goes up by 7 FP KE.

So TenPoint actually made the right call to equip the Vengent S440 with the RangeMaster Pro Scope. It features a variable speed and arrow drop-compensation. The scope also doesn’t require any adjustments for distance.

It’s equipped with an etched glass reticle and fully multi-coated 1.5x to 5x optics that reduce the loss of light transmission. You can choose from a non-illuminated black dot for one of two rheostat-controlled illuminated, colored dots (red or green).

The TenPoint Vengent S440 ships fully assembled and includes a ready-to-hunt package. Therefor it’s not needed to assemble the crossbow yourself.

One of the main features of a TenPoint crossbow is the ACUslide cocking and decocking mechanism. The draw weight of the Vengent S440 is 250-pounds. However, if you use the ACUslide Cocking and Decocking system, you’ll reduce the draw weight with 95%. This means that you’ll only need around 12.5 pounds of force to cock the crossbow.

The ACUslide cocking and decocking system is probably the best cocking system on the crossbow market today. It’s the safest and easiest way to cock a crossbow. You can let the handle go mid crank and it will not spin/release. From a half-cocked position you can then also safely decock the crossbow.

TenPoint also did an amazing job to keep the ACUslide as quiet as possible. No clicking or sounds coming from the ACUslide when you crank it.

You do not want to shoot at the same spot over and over. You’ll definitely destroy a lot of arrows. This crossbow is extremely accurate!

The Dovetail bubble level is a nice addition to the crossbow as well. You can easily see, while getting ready for the shot, if you’re holding the crossbow level.

If you love TenPoint, then you’ll surely love the Vengent S440. It’s a fast, accurate, narrow and safe crossbow. Premium features like the S1 trigger and the ACUslide cocking and decocking mechanism are just unmatched. TenPoint keeps delivering high-quality crossbows and they will not let you down. The Vengent S440 is a lot cheaper than the Vapor RS470 but still has some amazing features and is blazing fast! It doesn’t shoot arrows at a whopping 470 feet per second, but 440 feet per second is more than enough to shoot your target at 50-70 yards.